The 18th of August should have been the happiest day of my life. At 1:00 hrs. AM in the middle of the night Josie woke up. Sandra and myself woke up to bring Josie back to sleep. At that moment the amniotic fluid bladder burst. For the 19th of August a Caesarean was plant, seeing Ronja was not turning to come out the right way. We called the midwife who told us to drive to the hospital right away. At 2:50Am on the 19th our daughter Ronja was born. At about 3:10 Am I held her for the first time. At 5:30 AM I went home to bring Josie back to bed seeing Sandra’s parents could not quite her and bring her back to bed, seeing she was the big sister now.

At 6:30 AM Sandra called me from the hospital and told me that Ronja was gone. She did not get any air and turned blue. I drove direct to the hospital at Neustadt / Aisch were she was to quite her down and to find out more what was wrong and were our daughter was. Sandra was not in good condition at that moment after the operation.

At the hospital I was informed that Ronja turned blue and that the took her to the Children hospital in Fuerth near Nurnberg safety wise. Off I went to look for my daughter. At 8:30 AM I found her. She was lying in an incubator and became 40% oxygen. The nurse told me even with the oxygen it did not look good. They said that she might have a heart failure. They told me that they have to check it in Erlangen at the heart hospital. A transport was made for her at 9:30 AM to have her checked out there at 10:00 AM. More information I did not get or nor did they want to tell me at the Moment.

The baby transport arrived at 9:30AM and I was getting nervous. All those machines. What was going on with Ronja? They told me to drive ahead already and they would pass me on the way. It happened so before Erlangen they passed me on the highway. She went pass me with the blue lights on the transporter, it was a bad emotion.

At the hospital they waited already for me and told me that they checked out my daughter already. I was told that she has a bad heart failure called Transposion of the great Arteries. If they could not operate here within the next days she would not have a chance in her short life. 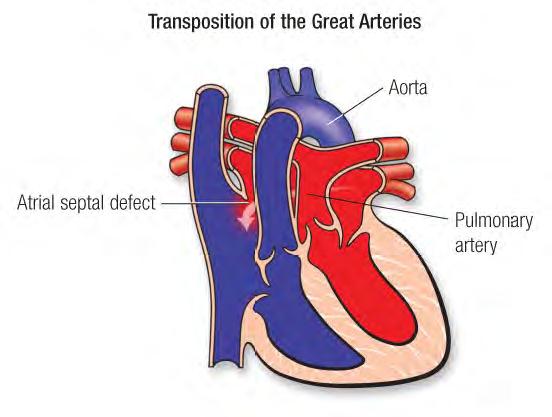 What now came were the worst weeks in our lives for us. Only alone the informative conversations we had with the doctors (which were important for us), the weeks in the critical care unit, and the waiting time during the operation (8 Hours) brought us to our boundaries. We had to go to those boundaries to hold out.

Today we know what lies behind us. Also from all who helped us during that hard time? Thanks go to our families, friends and acquaintance. As well to the Ronald-MC-Donald oasis. Main thanks go to Ines Rauschmaier the manager of the strength giving oasis and to forget all the doctors (Dr. M. Glöckler, Dr. Zink) the professors (Prof. Dr. Dietrich, and Prof. Dr. Cesnjevar) all the children Nurses, and the children Nurse Pupils. Without them our daughter would not be living now. You always gave us new hope thru these hard times.